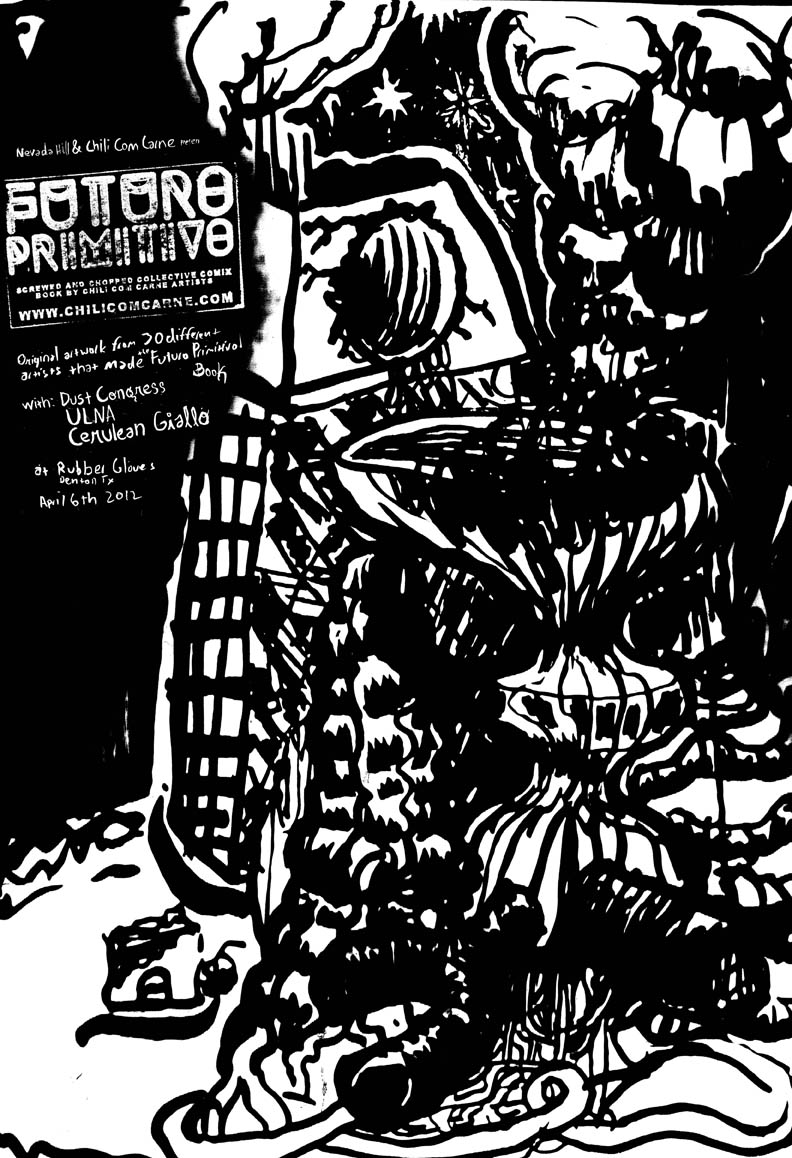 Fifth Chili Com Carne show in Denton (Texas), organized by Nevada Hill, again in Rubber Gloves, this time featuring Futuro Primitivo collective exhibition.
...
Ulna , Dust Congress and Cerulean Giallo are playing on the opening night - 6th April.
...
Not Tex Not Mex is a cycle of art exhibitons about Portuguese comix and illustration artists, curated by Texan artist Nevada Hill. In this show you can see original work of 30 different artists that made Futuro Primitivo comix book, in a seminal project of mixing different strips from different artists making all together a brand new comix story. Somehow is a "skrew & chopped" comix experience in clear homage to Texan DJ Skrew remix concepts.
...

«I step on skulls of generations that have not formed
I hear painful cries of wars that are to come
to create everything again, from the beginning
to teach new minds»
- Sepultura

For a long time, in this hyper-computerized society, that the role of publishing has been played in an apparent paradox: ubiquitous and insignificant. Every day we publish texts or images with DTP tools (word processors, software for sound and video) and, at the same time, we're “drowning” in an absurd abundance of information. All kind of things “come out to the public” - without ethics, censorship or discipline - issues that resurface later in more official and institutional registry. We would like “FUTURO PRIMITIVO” (Primitive Future) to be the last manifesto of the Art of Publishing and hence, we invited ALL members of the Chili Com Carne to participate in this volume!

We are well aware of the difficulties that one, wishing to do Comics in Portugal, faces: without the slightest expectation of financial return, most of the production is done by the author in his/her spare time; after browsing the site of the Finances; submitting his/her work to an idiot company; cleaning the house; having dinner and after the kids went to bed. At this pace, the putative conclusion of a book gloriously estimating 100 pages, would take how long? A decade? We started to prepare this project as the 12th volume of the CCC Collection, accompanied by an exhibition with the same name for the International Festival of Comics of Beja, followed by the Crack Festival in Rome, the Comics Festival in Helsinki and Malmö (Sweden) and now Denton / Texas / USA - soon it will be in Brazil too.

The given theme was dystopian and post-apocalyptic Science Fiction. As an inspiration, each author was asked to choose an item from a list of some of the biggest technological creations that caused Humanity to move forward into abyss: weapons, agriculture, fire, shelter, wheel, metal, currency, printing, steam engine, electricity, nuclear power, transistor, the pill and Dolly ... The Comics should be made of two strips per page in order to isolate the images, as if they were illustrations for the exhibition and, in this way we’d combine the work of different authors. Strips / panels/ comics should be reorganized and mixed together, so that it would create a "meta-story" with the sum of all these “graphic-narrative units” of various Comics.
Now, in Rubber Gloves (in Denton, Texas) you can admire the original work of many of the authors of the anthology like André Lemos (it's his 4th exhibition in US - the first Not Tex Not Mex show, other included Divide et Impera in Charlottesville VA), Bruno Borges, Lucas Almeida (both also in previous Not Tex Not Mex), Marcos Farrajota (publisher of MMMNNNRRRG label that published US artist like Mike Diana and Aaron $hunga), João Maio Pinto, Jucifer, José Feitor, Pepedelrey, Sílvia Rodrigues, Pedro Brito, Afonso Ferreira, Ricardo Martins (drummer of Lobster), Inês Cóias, André Ruivo, Rudolfo, Manuel Pereira (Noise artist of Narcolepsia tapes), André Coelho (Industrial musician of Sektor 304 released by US Malignant Records), Ana Menezes, Christina Casnellie (Seattle born and globetrotter), João chambel, Daniel Seabra Lopes, Ana Ribeiro, Andreia Rechena, Rafael Gouveia, David Campos and special guests Susa Monteiro and Nevada Hill.

There will be a soundtrack in the exhibition but it's available for FREE download at the You Are Not Stealing Records net-label official blog. The artists / musicians are Ondina Pires, Chiby Shit Plan, Cospe, Pedro Sousa, Stealing Orchestra & Kao Ryao, Assinante 35278/TW, J. Ortega, JMP, John P-Cabasa, Somália, André Ruivo, Pepedelrey, Rita Braga, Te Voy A Matar, TendaGruta, zZZOUNDZZz, Marte & Stealing Orchestra. We asked to Chili Com Carne artists (musicians or not) to contribute in the soundtrack with "primitive future" as a theme - the theme of the comic-book - so you can expect dystopia and apocalypse from this record. Some of the collaborators are already known in the Portuguese music scene like Ondina Pires (from important bands like Pop Dell Arte and The Great Lesbian Show) or Stealing Orchestra - that released in begining of 2011 their third and truly amazing album, Deliverance. Some work on the fringe of the "new music" like Pedro Sousa (Improv sax player, member of Oto and Pão) and Somália (Noise Rock), abstract or functional electronics like John P-Cabasa or Te Voy a Matar (of the Christian Punk Rock collective FlorCaveira and Pop band Pontos Negros), naturalist lo-fi of Rita Braga and post-Industrial Dark Ambient of TendaGruta (mysterious band of Porto that released this year one track on Aural Bowels). And then some comix artists and illustrators made for the first time some "sound" like Pepedelrey, J.Ortega, JMP or Marte while for André Ruivo it's like a "comeback" since he had the Rollana Beat project in the 90s.

Although the different personalities of the contributors, it's kind of curious that the soundtrack is musically rather coherent. Maybe we all imagine the "end of the world" tragically in a uniform way, without the show-off of 3D + CGI wrongly mixed with some 80s trash movie. Chili Com Carne always fighted Nostalgia, so we're proud of this opus not being "retro".
Nuclear generators can explode. We're ready!